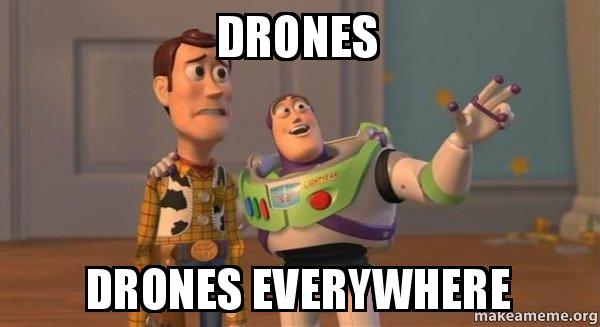 Barely a week ago, it was announced in a publication in the Official Gazette Royal Decree 552/2014, of  June 27, in which the Rules of the Air and common operational arrangements for services and air navigation procedures are developed, modifies the Royal Decree 57/2002 of  January 18, in which the Air Traffic Regulations are approved.

Leaving aside technical paragraphs and sensationalist stories that don’t clarify anything, we will explain a little better what this means for photographers and / or videographers.

– It’s a temporary regulation, and until it is final, you can only perform operations in uncontrolled airspace and unpopulated areas. Basically, you can only fly your drone in areas without planes passing by and the like, and where there’s no people around.

– With this Royal Decree-Law, prohibition is lifted, announced last April by the Ministry of public works, in which this things were said:

“… It is not allowed, and never has been, the use of remotely piloted aircraft with commercial or professional purposes, to make aerial work activities, such as photogrammetric use, smart agriculture (detect on a farm those specific plants that need an intervention, such as irrigation, fumigation, for optimize a crop), illustrated reports of all kinds, inspecting power lines, railways, border surveillance, forest fire detection, recognition of places affected by natural disasters to direct adequately support, etc. “.

Lifting this ban means that the regulation allows civilians to use drones to commercial or professional purposes. In this country one thing is forbidden and, until people know that is not forbidden any longer, months can pass, and all blinded with smoke. So: don’t worry, be happy.

– The rules for drones of 150 kg or less, have been regulated. Those with higher weight they have to be regulated still. According to the takeoff weight (fuel + camera + drone) aircraft are classified under 2 Kg., up to 25 Kg., and more than 25 kg.

– All drones must wear a visible identification plaque. Like a some kind of plate.

– The companies / people that are drone operators, for each flight must have an operations manual and an aviation safety study (namely the maximum wind of that day and similar).

– All drone pilots must have, any kind of pilot license, including ultra light one. Or prove that they have the theoretical knowledge to get it.

– Drones less than 25 kg in take-off shall not be registered in the Register of Aircraft Registration or have a certificate of airworthiness. The ones exceeding 25 Kg. on the other hand, they must have them.

– These requirements do not absolve the operator to be responsible of the aircraft, operation, and meet all other applicable regulations (which are very large and long). With “other applicable regulations” refers primarily to the use of radio spectrum (the radio), data protection to take aerial pictures and liability for damage caused by the operation of the aircraft (it’s not forced on you to have an insurance for safety and liability, but if you do damage, you will have to pay for it).

What does it mean for a civil / photographer / videographer all this new legislation?

– If you don’t have a drone yet, it will cost you between 300 and 500 €, excluding batteries, spare parts, fuel and having camera. Come on!, throw the house out of the window and adding everything we leave it at 500 €.

– For manual operations and security you need to know about aviation, and what better to take off than with the ultra light pilot licence. Throw in € 3000 and many other undefined expenses for the drone pilot’s license (no prices yet).

For drones under 25 Kg

For drones over 25 Kg

Small drones are a technology on the rise, but with all these regulations (although necessary ones), they make you pull back when undertaken, by its high cost in both money and time. Also time in training and time for equipment overhaul and paperwork, because in this country, things go slowly in palace.

On the other hand, we are lucky, because in USA they have banned the commercial use of drones and some companies are rethinking their projects to other countries. Hopefully our skies are in their mind.

Until next week, and BonapaShooting continues!!