How to make mini worlds? [TUTORIAL]

How to make mini worlds? [TUTORIAL]

If you are bored of the typical panoramic 360, we will teach you to give them a completely different look. Look, look! 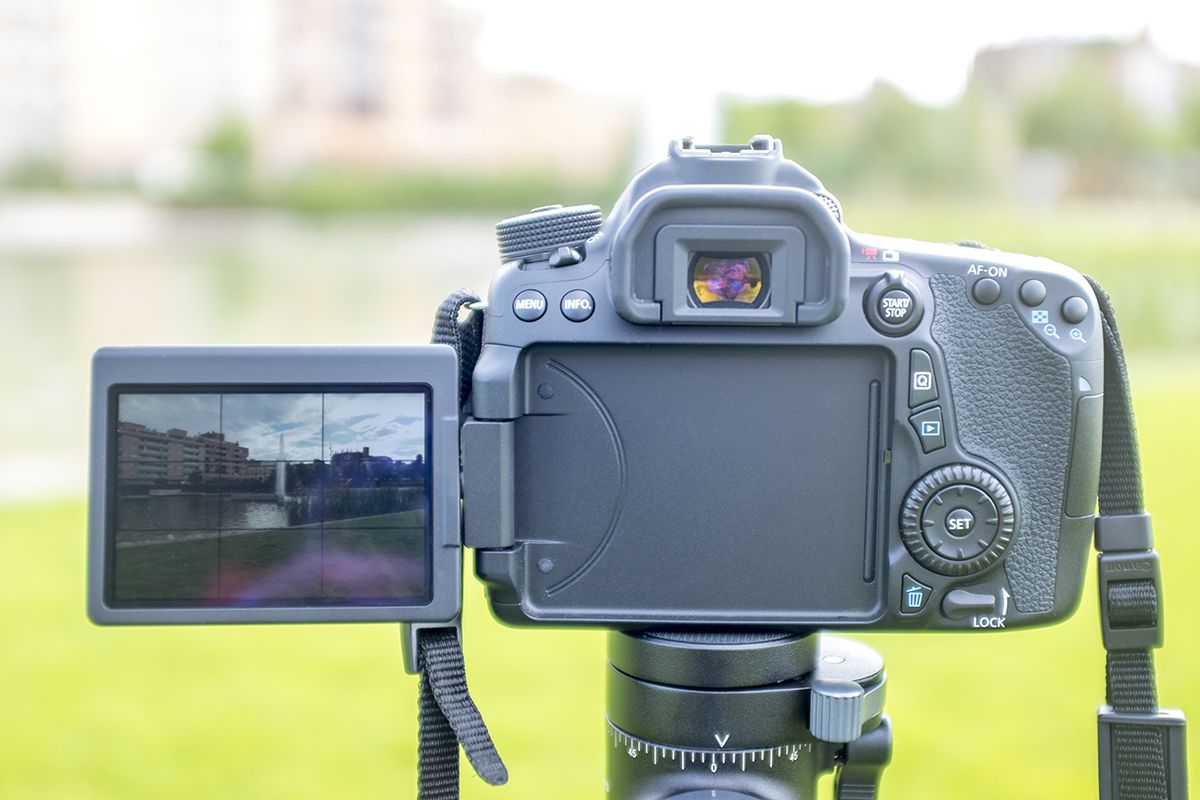 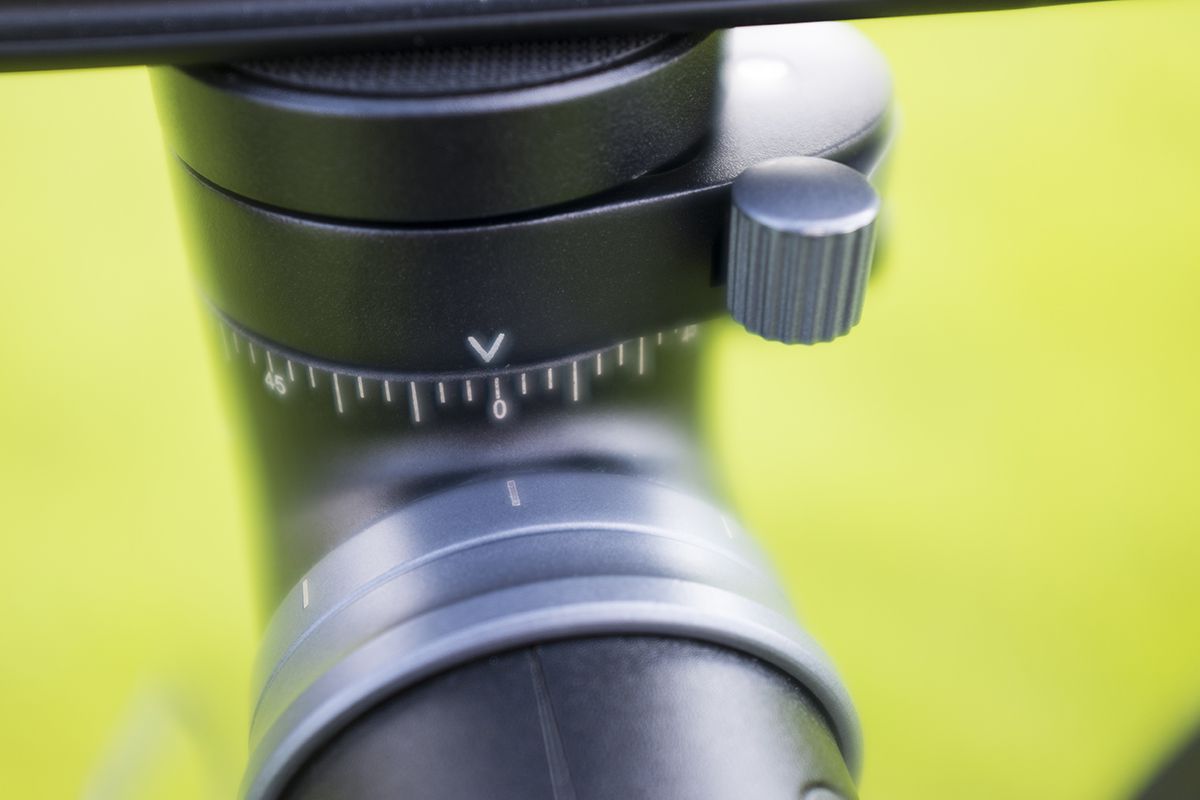 Note: If you do not have an SLR, but a smartphone with an option to pan you can also do this tutorial.

And now we’re going on tour!

Put the tripod (or you) more or less in the center of the place of everything you want to capture in 360o. Try to avoid having people or objects in the foreground so that later deformed to create the mini world.

Captures 360 photos from several perspectives kneecap just moving your tripod. Calculate exposure with high f for more focused area, focuses on the farthest point and put the focus on manual so that it will not move.

At least give 3 laps: one normal view, one focusing more towards the sky and another to the ground.

If you do with smartphone tries to take up as straight as possible, to prevent it from moving too much paste you elbows to your body as you turn on your feet. And if it allows you to do 180 degrees, make two shots and then put them together in Photoshop to get a 360 °.

In our case we have shot in RAW + JPEG, but we will only use JPEG. They have also reduced the size to 800×533 pixels instead of using the original 5472×3648. Although if you have a very powerful computer and a long time later, processed to the original size (and go for a long walk while).

If you did with smartphone skip to step 3.3, but you can also read the following and learn more.

3.1 To change JPEG size in a single batch, do the following: 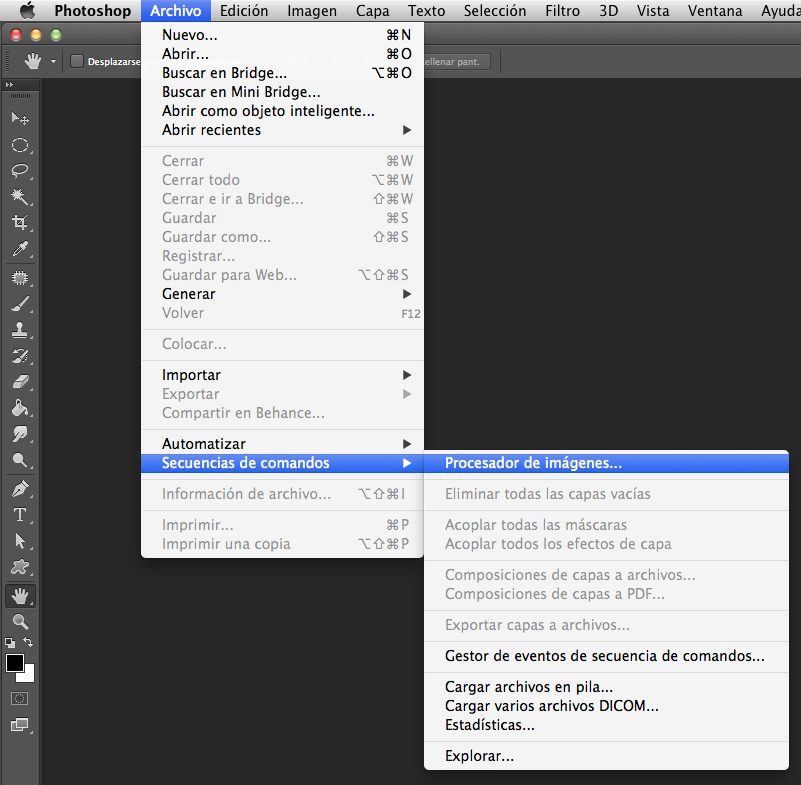 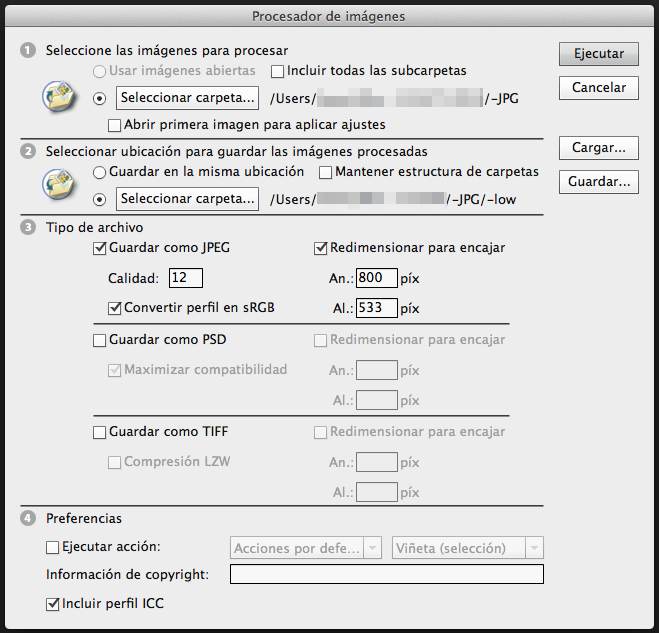 The size must be commensurate with the proportions of your files

3.2 Once the images changed to a more manageable size, we make the panorama. 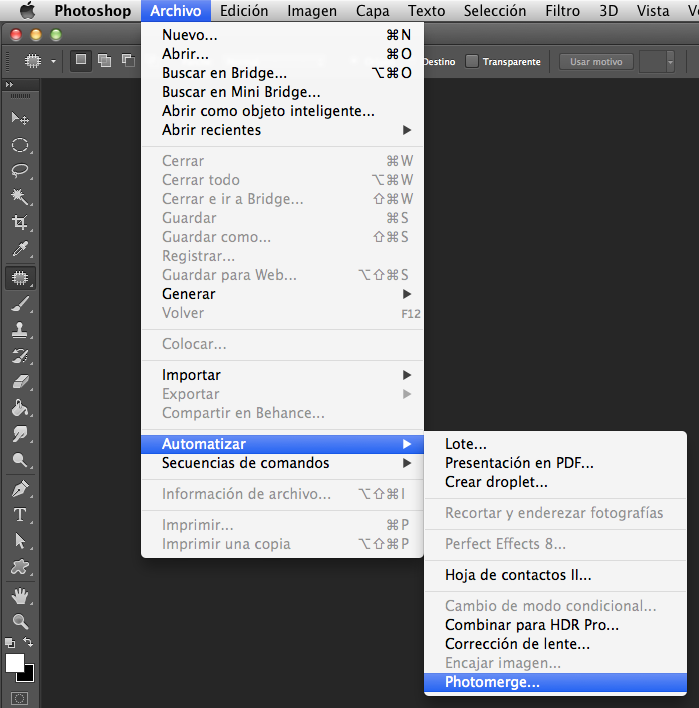 Yes, this is the “Photomerge”

We give the button “Browse” to find the folder where we have our files and activate the option “Merge images.” In composition we chose the “Pin”. We click OK and let him do his job. 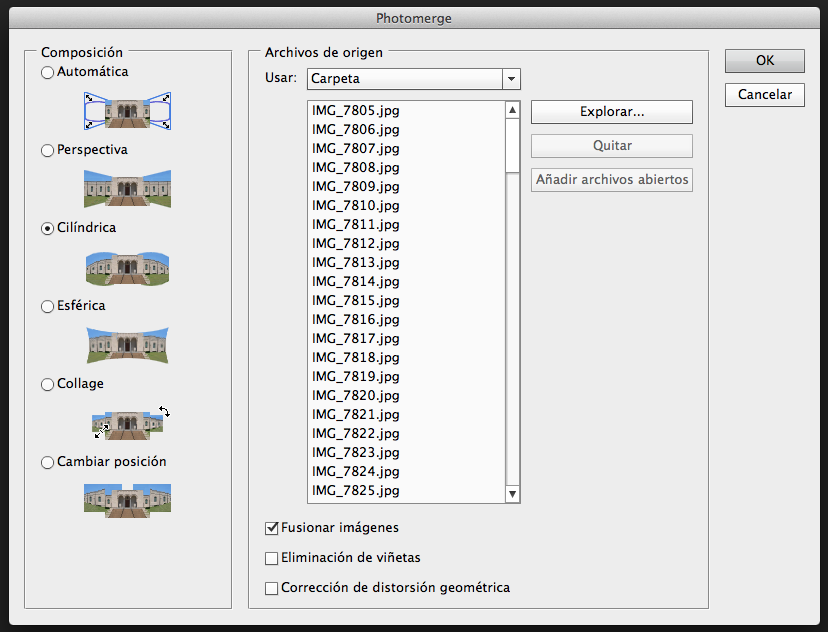 You can have a coffee (or two) while waiting

When finished processing, you will come across something like this: 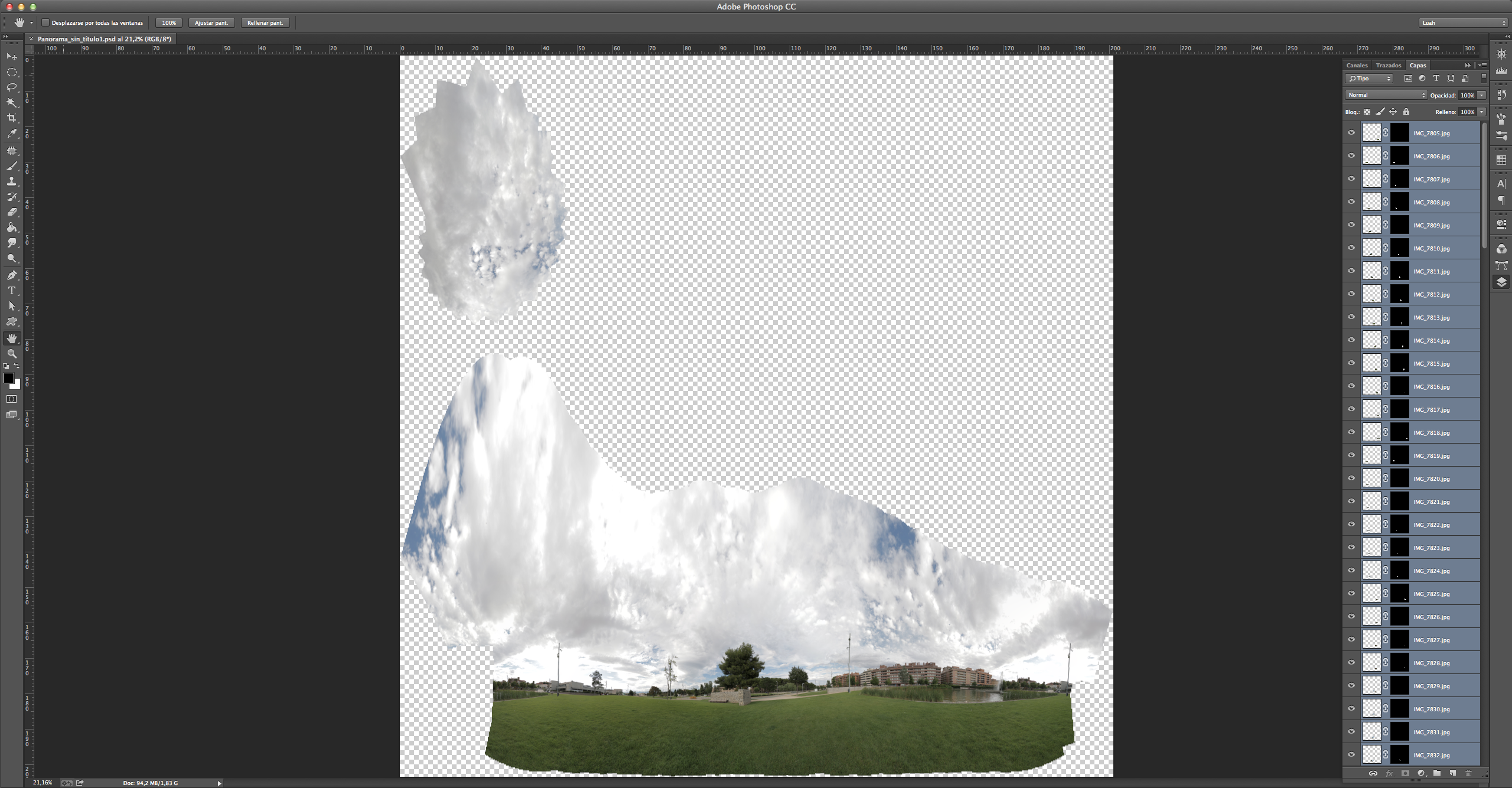 Ignoring that you have created in your own corner of heaven, we have the raw pan. We make a selection with the rectangular frame of the part that most concerns us and then go to “Edit”, “Copy Merged”, “File”, “New …”, “Edit”, “Paste”. And we have what we want to use a separate file.

3.3 If the did with smartphone in one shot of 360 can start from here, if 180 was two shots, before going have to unite them into one.

Now observe carefully where begins and ends our overview to choose the cuts. 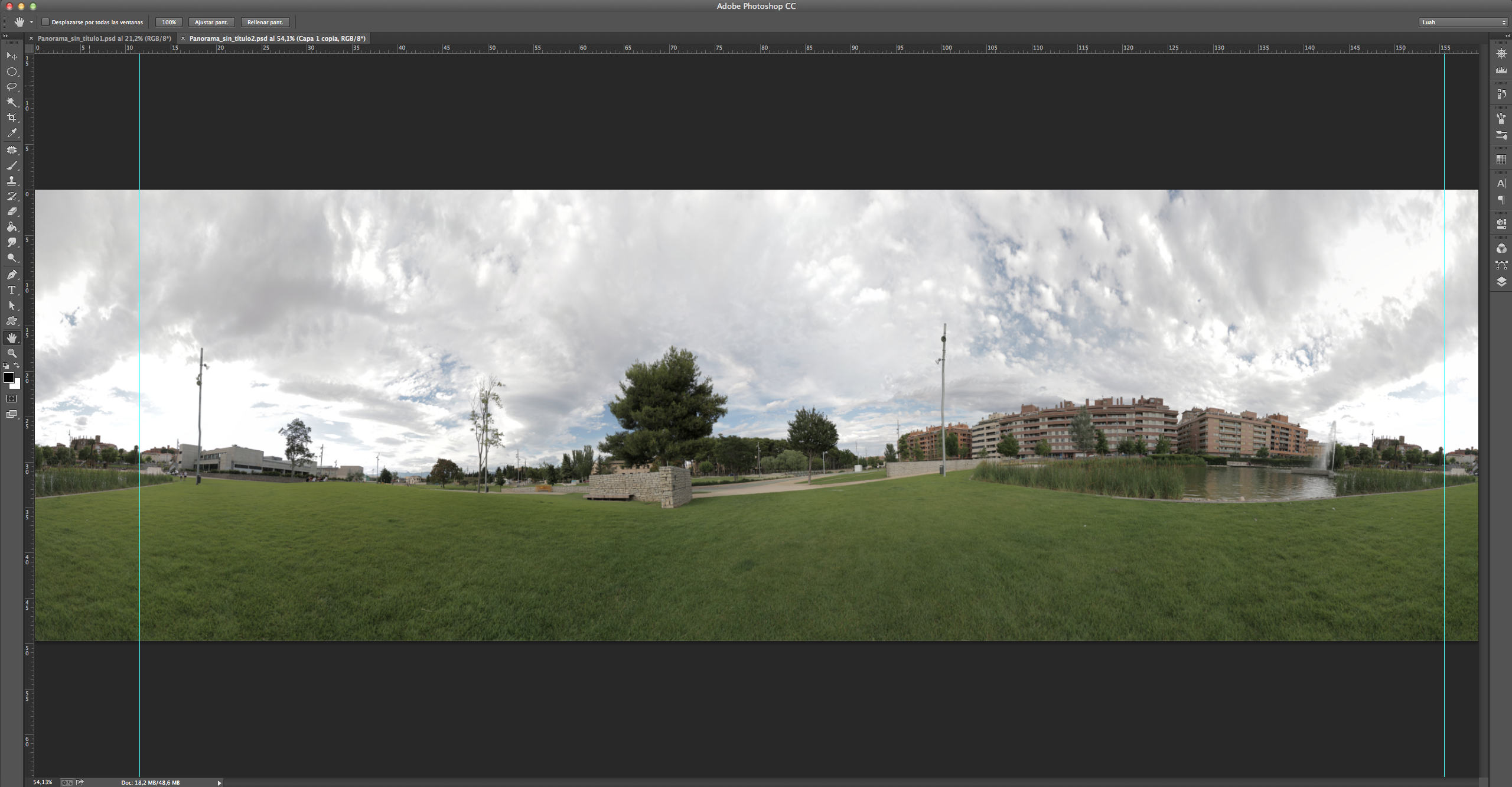 And once we cut back to start the final phase.

3.4 Now go to “Image”, “Image Size” and put the width with the same length as the height so that our image is square. 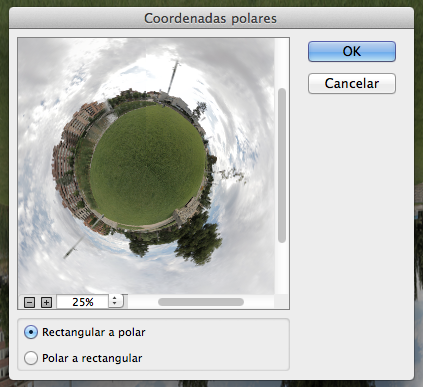 From “Rectangular to polar”

3.6 Now it only remains with the clone stamp tool (S) and the patch (J) fix the union that stays at the top and touches the image to your liking. Here our result. 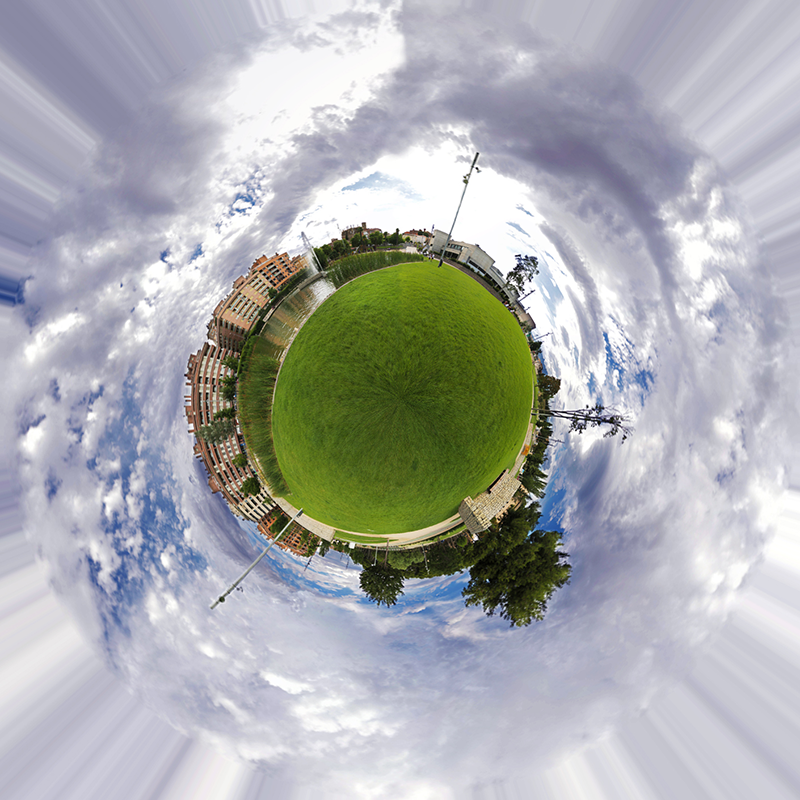 What have been your mini worlds? We want to know!

Until next week, and keep on BonapaShooting!